Success has many fathers, but failure is most often a bastard child.  Lawrd knows who first conceived it, but who was the first to publish information regarding BHO extraction???

Somewhat counter intuitively, the oldest LPG cannabis extractions that I could find of record of, was actually Eden Labs extracting with sub critical Propane in 1997, under CA Proposition 215, using their SCFE CO2 equipment.  I had always erroneously ASSumed the first BHO was open blasting.

The earliest actual record of open blasting that I could find was The Other Side on 11-3-98, followed by Freejon on 11-6-98 posted in Erowid:

Followed by a flurry of others:

Including Indra’s in 5-1-1999 and republished again in 2-19-2014, detailing open blasting through a PVC tube, and including his argument against there being any interaction between PVC and butane.

I include Indra’s post here only to put his claims of being the first in proper perspective.

I didn’t get involved in cannabis concentrates until after I obtained my OMMP license in 2007, but being a retired manufacturing (facilities, equipment, and process) engineer, I automatically first checked butane compatibility with PVC, so never used a PVC tube to open blast.

Instead I initially made my own copper columns, which worked well as long as the joints were lead free and you kept them clean, but subsequently contracted borosilicate columns from a local scientific glass shop.

Here is an example of my first copper extraction column with scientific grade cat litter bucket support, cut out to straddle 10” Pyrex dish.  Note electrical ground clamp for the can. 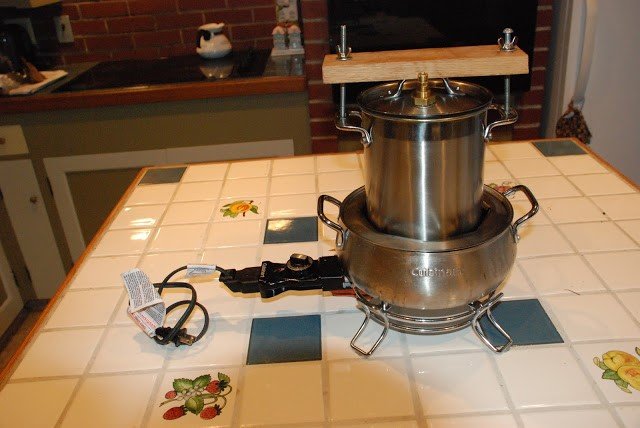 Injecting the LPG from a can

Besides open blasting through a packed column, there was also the thermos technique, which involved packing them material into a stainless thermos and sticking it into a -18C/0F freezer overnight, along with the butane, and then discharging the butane into the thermos through a hole in the lid and setting it in a cool spot for thirty minutes or so, before pouring out into an evaporation dish.

Boiling off the LPG in hot water bath

Obtaining clean LPG mixtures was an issue, pretty much limited to using lighter butane mixtures, and available limited places in bulk.  My attempts to get a commercial supplier of Instrument grade LPG were unsuccessful due to the stigma attached to our cannabis industry.

There was also the issue of getting rid of garbage bags full of cans afterwards. We were using so many cans at SPR that we arranged for one of our attorneys to get rid of them for us.

Of course there is the underlying environmental costs of oil exploration drilling, and refining before subsequently just venting it to the atmosphere as a smog causing VOC.

Looking for a solution to those issues, in 2009 my research led to FOAF’s 2006 post in IC Mag, entitled BHO Large scale closed system and can be read at: https://www.icmag.com/ic/showthread.php?t=27954

At that time I was unaware that Fritz and Matt Ellis were already doing closed circuit LPG extraction, so from FOAF’s design, I developed and built the following prototype and posted the results on both Skunk Pharm Research site and at 02-07-2011 on IC Mag as Butane Extraction and Recovery System at:

A number of people internationally started building the Terpenator design, as well as spinning off designs of their own incorporating the same general principles.