Legalization of medical cannabis has enabled brothers and sisters with limited funds to legally grow their own cannabis meds without the specter of arrest, but how are they to legally and affordably extract the concentrates from that cannabis for formulation into their meds with minimal outlay?

Two methods using GRAS solvents formerly in common use are LPG extraction and Ethanol extraction.  Due to the number of explosions, injuries, and deaths from boneheads extracting indoors at home and in motels, it is now a Class B felony in these here parts to extract cannabis using LPG outside a permitted facility.

Permitted facilities are not in residential or high-density zones and include closed loop extraction systems, C1D1 rooms and other capital-intensive equipment, so no longer in the scope of your average brother and sister with little to no money.

While it can still be done safely outdoors, those of us on limited budget and electing to remain legal, excludes those techniques.

Us’n includes both those morally opposed to violating the law, as well as those believing the laws poorly thought out and written, but not wishing to gamble with high legal costs and the possibility of imprisonment.

That still leaves ethanol as a viable GRAS solvent capable of extracting the concentrates that we covet for formulating our medications.  Alas and alack, that doesn’t solve the problem for brothers and sisters squeaking by financially, due to high liquor taxation, or those in areas where big brother is again protecting us from ourselves and high proof ethanol is not legally available.

That leads us to the subject of hiring $6.75 worth of hard-working Turbo yeast and feed them about $22.93 worth of delicious corn sugar and then distilling off the gallon of ethanol waste that they excrete because they are so happy.

$29.68 a gallon is about 3.79 Liters, or $7.83 per liter for mandatory consumables, and I spent another discretionary $1.51 for 16 oz of Star San that I used to sterilize the carboy and the citric acid that I dropped the wash pH to 4.0 with to optimize conditions.

You can also get from 185 proof to 190 or even 200 proof using a molecular sieve desiccant that can be baked out and reused multiple times.

One of the reasons that I selected corn sugar, or dextrose for this project, is that Turbo yeast only turns it into ethanol.  Other sugars like fruticose can turn into methanol, which is toxic.  When running other sugars, the “heads” or fore shot (first out) are typically tossed, due to their methanol or ethyl acetate content.

In looking for supplies, I found everything I needed and then some online, but after checking prices went shopping here locally at F.H. Steinbart Co, where prices were actually cheaper and it helps keep our local economy’s doors open, especially during this pandemic.

As equipment expenses, I invested in a Fermonster wide mouth fermenting carboy at $32.95 and a rubber stopper with airlock at $3.80.

I opted for the wide mouth carboy for ease of scrubbing down the interior walls during cleaning.  It is of course good for multiple batches, so the $36.75 total is amortized.

Pick a number???  I predict I could get more than 25 batches out of the carboy, so let’s call that $1.47 per five-gallon run producing 1 gallon of ethanol.

Talk to your local law professional for interpreting the laws at your specific location, but I believe that as I am using the alcohol to extract essential oils versus drinking it, and the still that I used was under one gallon capacity, I believe I did this all legally.

My first step after accumulating the equipment and supplies, was to sanitize the carboy using an ounce of Star San for five gallons of water, followed by three freshwater rinses.

Next I heated 5 gallons of water on my outdoor seafood boiler to 104F and stirred in the powdered corn sugar.  That dropped the temperature below my target point 70 to 82F, but only one degree, so I stirred in the Turbo yeast and checked the Ph.

I adjusted the Ph to 4.0 adding citric acid, and then poured the mixture into my carboy.

After adding the stopper and air lock, I set it aside to let work.  The operating temperature for Turbo yeast is 68F to 82F, and our kitchen temperature was actually at 68F, but still began to work so vigorously at about two to three bubbles per second, that it blew droplets of water out of the S bubbler air lock.  I can only imagine how vigorously it would have been at 82F.

On the third morning, the bubbling had stopped, so I prepared to siphon it out for settling, but alas it started bubbling again as the furnace warmed the house up from 67F to 68F, so I moved it to the heat register and added towels to help direct and control the heat.  It continued to bubble at a slow rate for two more days before I decanted it.

Note to self, make ethanol fermentation runs here in the mystical land of OR during the summer, when the temperatures are warmer.  At about 67F, the Turbo yeast falls asleep, but will tolerate up to about 86F on the high side.

Once the bubbling really stopped above 68F, I siphoned it off into half gallon jars and experimented with clarifying them.  My hydrometer showed the wash to be at 20% ethanol by volume.

I stuck two jars in the refrigerator, two in the freezer, and tried to vacuum filter one jar as was.  The filtration as was experiment took a long time as the yeast quickly blinded my #1 lab filter, even with two commercial coffee filters protecting it.

Refrigerating in the frig or super cold in the freezer, sped up precipitation, but not a lot and I am limited in frig and freezer space, so I ended up distilling off the ethanol from the wash as was, where was.

It really didn’t seem to matter, though it may have affected flavor, which was not one of my prime directives for this particular experiment, but more about that later. 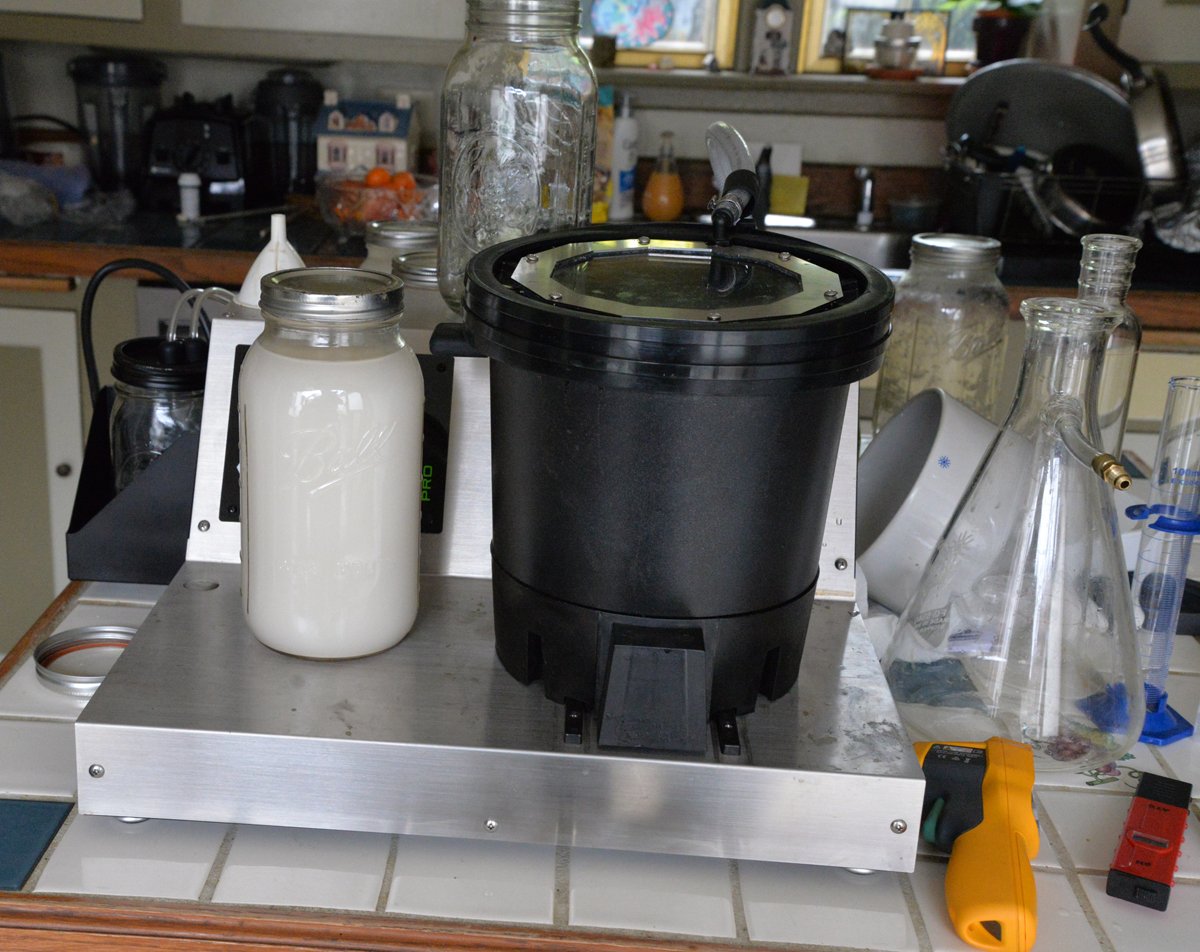 I used the Extract Craft EtOH Pro to distill off the ethanol, to complete my testing series of it and the MedXtract Essential.

Both are vacuum assisted stills and either could have been used for this step, as could my own simple DYI pot still condenser made from a stainless salad bowl full of ice water, with a submerged copper coil reliably reclaiming already heavily taxed ethanol since about 2007.

Here is how they work and how to build them:

Using the Extract Craft EtOH pro, the first pass produced from 125 to 130 proof, depending on how long I cooked the bottoms (what’s left after the alcohol is mostly gone).   Similar to making brandy with both the EtOH Pro and the Essential vacuum assisted pot stills.

No odor or taste of methanol or ethyl acetate and the flavor of the ethanol at that point was actually very good.  I’ve never been a Vodka drinker, but with the bottoms, it reminded me of brandy and I liked it.

From 185 proof, I added 150 mL of 3A molecular sieve that I had baked out at 525F for 4 hours, to 750 mL ethanol and brought the proof up to about 190, but left the alcohol turbid, so filtered out the desiccant and distilled one more time to remove any mol sieve sediments.

150 mL beaker of 3A Molecular Sieve activated by heating to 525F for 4 hours and then beaker wrapped in aluminum foil until cool, to exclude atmospheric moisture.

As you will note in the following picture, we achieved our goal of azeotropic 190 proof from scratch, suitable for essential oil extractions and tinctures.  Note that my graduated column is not tall enough for 190 proof on this hydrometer, so I used a tall narrow bottle, which allows the hydrometer to hang at a slight angle, making it harder to read.

190 Proof after desiccating with molecular sieve and distilling.

At 140 proof any flavor from the bottoms is gone and it tastes like just alcohol, so if I were making drinking liquor I would ostensibly stop at 130 proof, where just a taste does it, versus a pull or swig at 80 proof.

Conversely, it I wanted to start with a neutral spirit, 140 proof would be a good start.

This is the point where we get back to more about heat and distillation speed, versus flavor.  Not an issue above about 140 proof, but below that vacuum stills are capable of recovering the alcohol at lower temperatures than simple pot stills, thus affecting the flavor less.  Alas, I didn’t run split samples through all three stills to quantify the difference, but I don’t remember the first 130 proof run from simple pot stills being as tasty as this one was.

Another feature I liked about both vacuum stills, versus my simple pot still, is their transparent lid that allows direct viewing of the bubble activity.  With the temperature set at the proper level, you can watch the remaining water alcohol mixture turn into an azeotrope and the bubbling fall off to zip, at which point it is time to stop and just pour off the remaining water.

That left cleanup, which was easy with the wide mouth carboy that allowed me to wipe the interior walls of the carboy and then reach in and spray it down with a hose.

I simply rinsed out the 10 jars with a spray nozzle and then stuck them in the dish washer, before rinsing out the EtOH Pro pot and wiping dry with a paper towel.

Let the dishwasher handle it!

Soooo, where from here?  Check out how I achieved 190 proof in a single pass using a simple packed refluxing column at: https://graywolfslair.com/index.php/15-diy-equipment/15-8-ethanol-fractionating-still/15-8-1-refluxing-columns-for-producing-190-proof-ethanol