In addition, Sulfuric Acid (H2SO4) is also highly corrosive, though not flammable.

Do not attempt any of these techniques if you don’t have the proper training and equipment, including the MSDS sheets for all the chemicals involved.

We provide this as information only and neither recommend this procedure, or accept responsibility if you experiment with it yourself.

D Gold was probably the first to bring THC-O-Acetate to my attention in his book, Cannabis Alchemy, published originally in 1989.  He made it sound like a good thing, so I importuned Pharmer Joe, who was a biotechnology student taking organic chemistry at the time, to scheme with me.

It entered into our conversation when he told me that he had just come from chemistry lab, where they had been making aspirin (acetylsalicylic acid), by acetylizing salicylic acid using acetic anhydride, which is the same chemical used by D Gold to acetylize THC.

His first pass was so impressive, that he further developed the process, and shared it both on the SPR blog, and we taught numerous students how in our 2013 Alchemy classes.

I mention the classes, because they allowed us to have 10 to 20 volunteer test panel members to sample everything we made in class, so as to give us more input as to effects.

Let me note that the most common word to come out a test panel members mouth was, OH Wow!  Not because of overwhelming potency, but because it more readily passes the brain blood barrier and significant head effects arrive virtually instantly.

More varied were the longer term (<30 min) effects, but the second most common statement was, that was not at all what I expected.

Most reported a subtle brightening and color shift in the light, similar to mushrooms.

Most felt pleased with themselves and their surroundings, as well as being relaxed and thoughtful.

To a member, they reported liking the effects and as a measure of how well, there was virtually no THC-O-A leftover, which brings us to another issue.

Once we started making it for ourselves, we noted that is stored poorly, reverting back to acetic acid and developing a bite.  Another reason to make it in small batches.

We will be revisiting this process, now that we have THC-a crystals available to us, and see how that affects stability.  More on that later.

When making THC-O-Acetate, we use Acetic Anhydride (C4 H6 O3) as the conjugant and Sulfuric acid (H2 S O4) as the catalyst.  They change the polar C-OH to C-O-CH2=O-CH3.

Before we get started, let’s look at the equipment that we will need:

Mix ice and water in 5 gallon bucket, and drop in aquarium pump.  Connect to Alihn condenser via hoses and set aside.

Heat extract in a 104C/220F oven to dry of water and any residual alcohol.

Dissolve extract in the hexane at a ration of about 10:1.

Filter using a coffee filter or vacuum filter with a  #1 lab filter.

Filter to 0.2 microns and inject the solution into the boiling flask.

Slowly add Acetic Anhydride at a ratio of 2.5 mL to each gram of oil.

Adding Sulfuric acid one drop at a time down side of boiling flask.

Chill in ice bath as required.

Chill in ice bath as required.

Reflux setup with stirring hot plate, boiling flask, and Alihn condenser.  Note fan even though the fumes are contained.

Turn on heat and set at 82C/180F.  Watch vapor level in the Alihn condenser and set heat so that the vapor rises about half way.  The other half of the equation is of course the rate of water flow to the condenser and the temperature of that water, so some tweaking required for your specific setup.

We fill our bucket half full of ice and add enough water to float it and melt some of the ice.  If you are doing this outside using a hose, run the hose until it is cool, or plan to use a lot more ice.  We then dump in more ice and let it melt and chill some more, so that by the time the bucket is 80% full, I have enough liquid to circulate to the condenser, with the rest ice.

We open the throttle on the aquarium pump wide open, for the maximum flow and control the vapor level in the Alihn using the stirring hot plate heat controls.

When solution reaches a boil, start 60 minute process timer for up to 10grams oil, and double it for up to 20 grams.

When timer times out, turn off heat but continue to stir and allow the solution to cool below 66C/150F.

Pour mixture in a seperatory funnel.

Rinse flask with hexane and add to funnel.

Rinse flask again with 190 proof and add to the funnel.

Shake and let the solution settle. 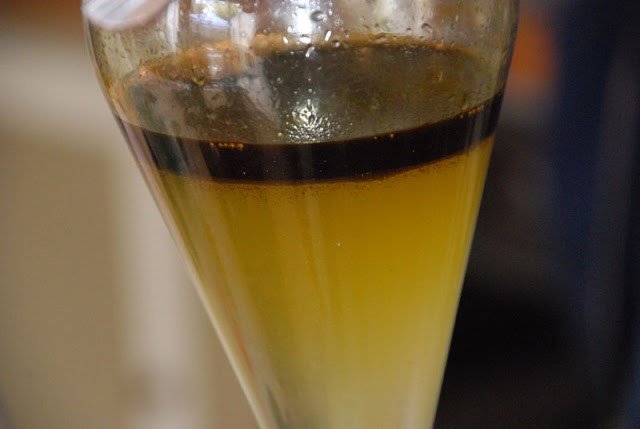 Drain off the water, but when close to the emulsion layer, stop and fill the funnel the rest of the way up with brine and shake vigorously, holding the stopper and petcock to prevent accidental spills. 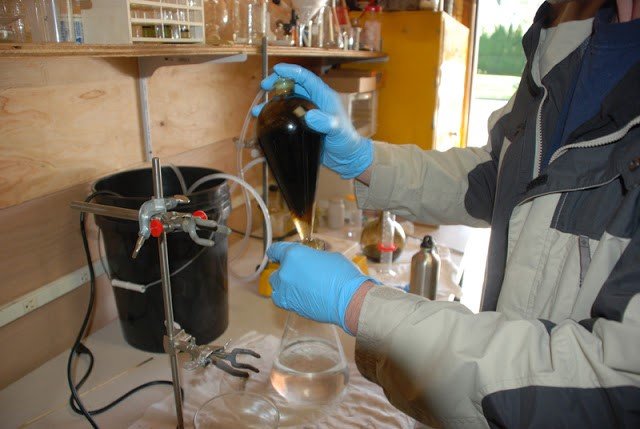 Holding the stopper and shaking

Once though shaking, hold vertical and slowly release the tapered stopper to release any built up gas pressure.

Let settle and again, drain, and continuing to wash until both gallons of brine are used up.

Drain off the last of the brine and decant the hexane solution into a clean beaker.

Remove hexane by evaporation or using an aid like an Isomizer, Extract Craft, or rotovape.

Redissolve at a 10:1 ratio in 95% ethanol and place the beaker in a denatured alcohol/dry ice bath for a minimum of 5 minutes.

Filter liquid with a # 1 lab filter or coffee filter.

Begin removing the alcohol.  It can be boiled off in a 250F hot oil bath, or in an ISO-3, or an Extract Craft Turbo, or a rotovape, or simply evaporated away on a 130F heat mat.

Wash two more times, by replenishing the ethanol in the solution, every time the solution reaches azeotropic balance, which is when most of the alcohol is gone and the boiling point starts to rise.

Remove from hot oil, when the solvent bubbles cease.

This article reflects my 2013 class notes, and not Pharmer Joe's latest and greatest.  He will be following up with a process description of his own as time allows, and we will corroborate on making a batch of THC-O-Acetate using THC-a crystals vis a vis an essential oil Absolute.