Some of the professional engineering services certifying cannabis extraction equipment require that the collection pot have a certification placard attached and we've approached that a couple different ways.  One is to use a Binks 2.5 gallon stainless paint pot, which comes with said certs attached, and another was to design one and have it built by a certified ASME Section VIII tank manufacturer.

Here is a Binks in a certified Mk IVC system: 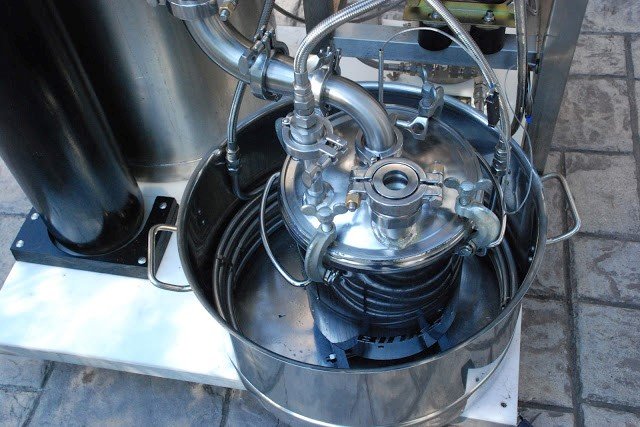 As noted, another way is to design one and have it built and certified by a certified ASME pressure vessel manufacturer, which is what we did for the WolfWurx Mk IVC/VC.

Here is a conceptual for a 12" pot, that an ASME manufacturer such as Marks Brothers Industries will be more than happy to flesh out with their own prints and engineering calculations:  The clamp is an ASME three bolt sanitary clamp, available from LJ Star. 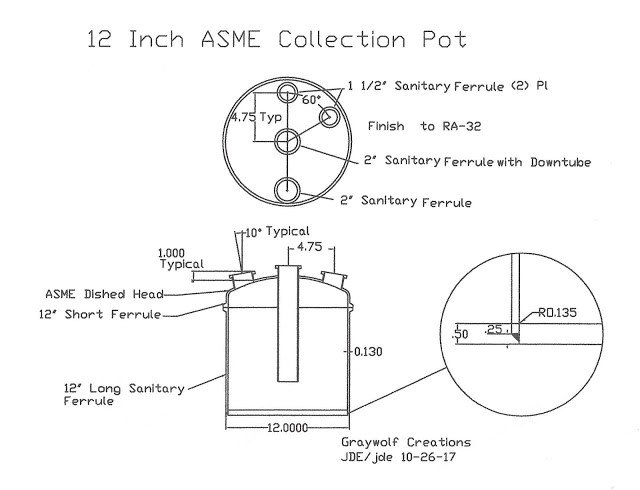 The major pinch point in LPG extraction is surface area of the recovery vessel, because more is better from a recovery speed standpoint, but alas pressure ratings for SSH and ASME sanitary clamps limit us to about 6” to 8” with those style closures.

ASME Section VIII Pressure Vessel codes, consider anything 6” diameter and below and operating above one atmosphere pressure, as Pressure Piping, and anything above 6” as a pressure vessel.

Pressure piping for LPG must meet 350 psi, and pressure vessels must meet 3X the maximum pressure the vessel might see in operation, including a cooling failure.

In the case of systems using sanitary components, the clamps are the limiting factor.

3X 204 psi is 612 psi, which you can see from the clamp rating chart that pressure would limit you to 4” using an ASME clamp, 6” using the SSH clamp.

You can also see that 6” actually falls in the 6”-and-under ASME LPG pressure piping which only has to meet 350 psi, or only 1.7X maximum operating pressure, and it should be noted that safety factor on an ASME clamp is 5X.

Joint failure is typically not clamp failure, but its failure to prevent leaks and lid design has some effects on that issue.

A round flat lid under internal pressure deflects and becomes hemispherical, which makes it smaller in diameter and using the outer lip as a pivot point, lift up off the gasket.  An ASME dished head on the other hand, his already bowed, and the bending moment on just the outer ring is significantly less.

One solution is to have the hemispherical lid welded to the tank wrapper, and 6” ferrule welded in its top for a clean out port.  That allows you to go to tank diameters larger than 12”, yet still use a clamp rated for the pressure.  Not as easy to clean, but workable with products requiring minimal

An easy to increase surface area is as a direct function of length, without increasing diameter, but the surface area of the evaporation pool changes depending on the level of fluid in the cylinders.  It has maximum surface area half full, which reduces rapidly as the fluid level falls, due to the curved bottom.

Boiling the the LPG under vacuum creates significant refrigeration, which must be offset by the addition of heat, or the process temperature will plummet until the process is at a standstill.  They also do not lend themselves as easily to a hemispherical shatter platter to minimize cleanup and support early pour and sauce techniques.

Perhaps two cylinder halves joined at 5 degree angle, with a sump in the middle, to which the shatter platter attaches.