While I participated in beta testing Extract Crafts Turbo vacuum still back in 2016, alas I missed that opportunity when they were beta testing their EtOH Pro unit, so imagine my joy and amazement when I got a shot at testing their production unit.

The opportunity came at a propitious moment, because we no longer have the skunk pharm research lab and it is now a Class B felony locally to extract using LPG outside a licensed and permitted facility.

As a consequence, despite owning BHO extraction equipment, I again joined the ranks of home extractor seeking viable safe legal affordable solutions and reviewed this equipment in that light.

“Is there an advantage to this over a simple countertop still like the Megahome still or a simple DIY pot still?”

“Is this a unit that would serve my needs when serving as my own resource for meds?”

My motivation was my need to extract this year’s C-99/NL harvest, as well as some Canna Gooey material I have been curing in jars since 2017, so I chose the still legal QWET process using 190 proof ethanol and the EtOH Pro allowed me to extract my two material lots in fifteen (15) half gallon runs.  A reasonable trial…….

The EtOH Pro arrived so professionally packaged that I took pictures to make sure I could get it right on the return after testing, and it bears the appearance of having been done by a packaging engineer.  Mine arrived in good shape, but even if it hadn’t, I would have had to salute them for their efforts.

Inside were instructions to download the operator’s manual from their web site and assembly was adequately covered, being straightforward and simply involving screwing in the four legs and attaching the lid and jar holsters. 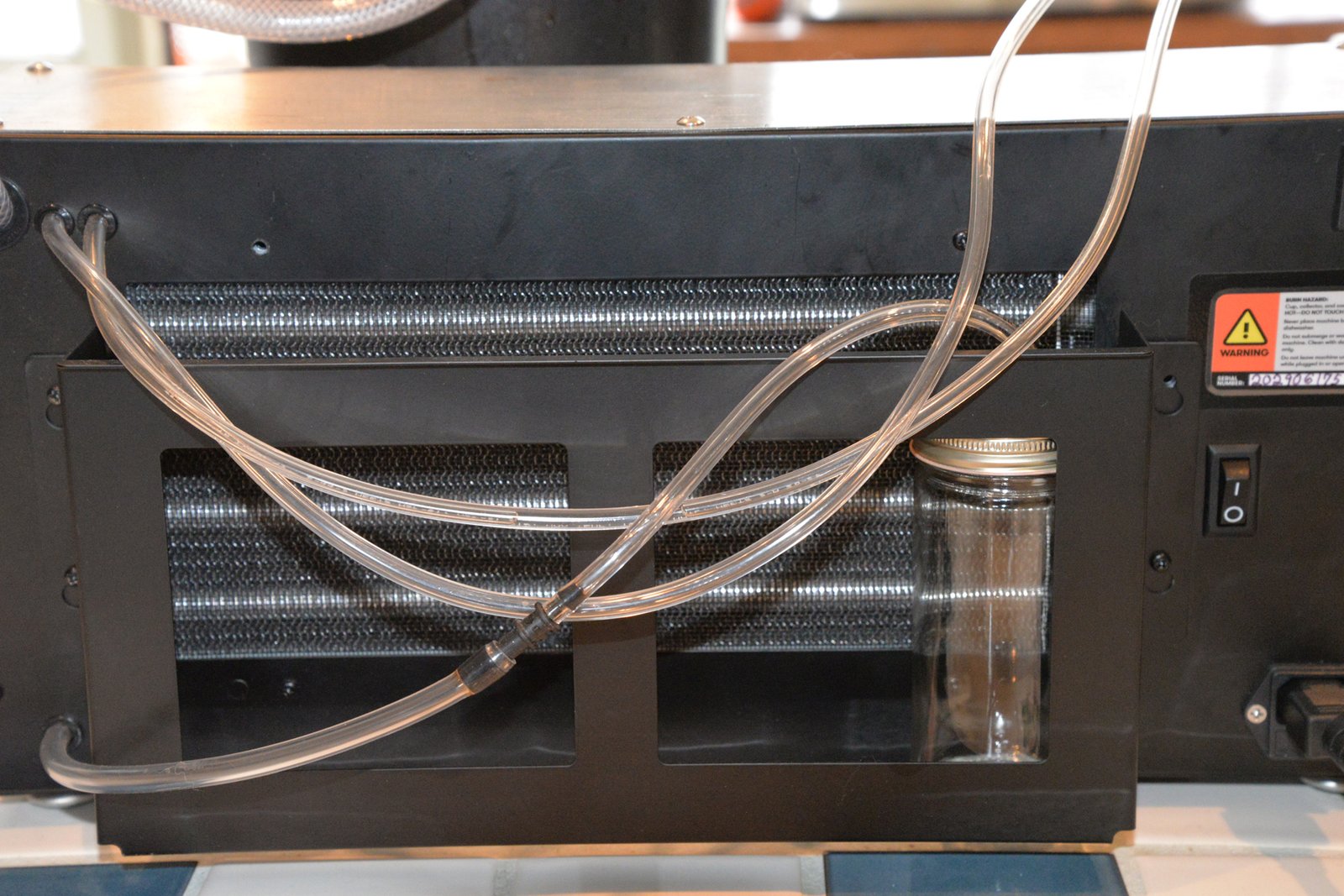 With lid stored in holster for convenience while processing reclaim pot 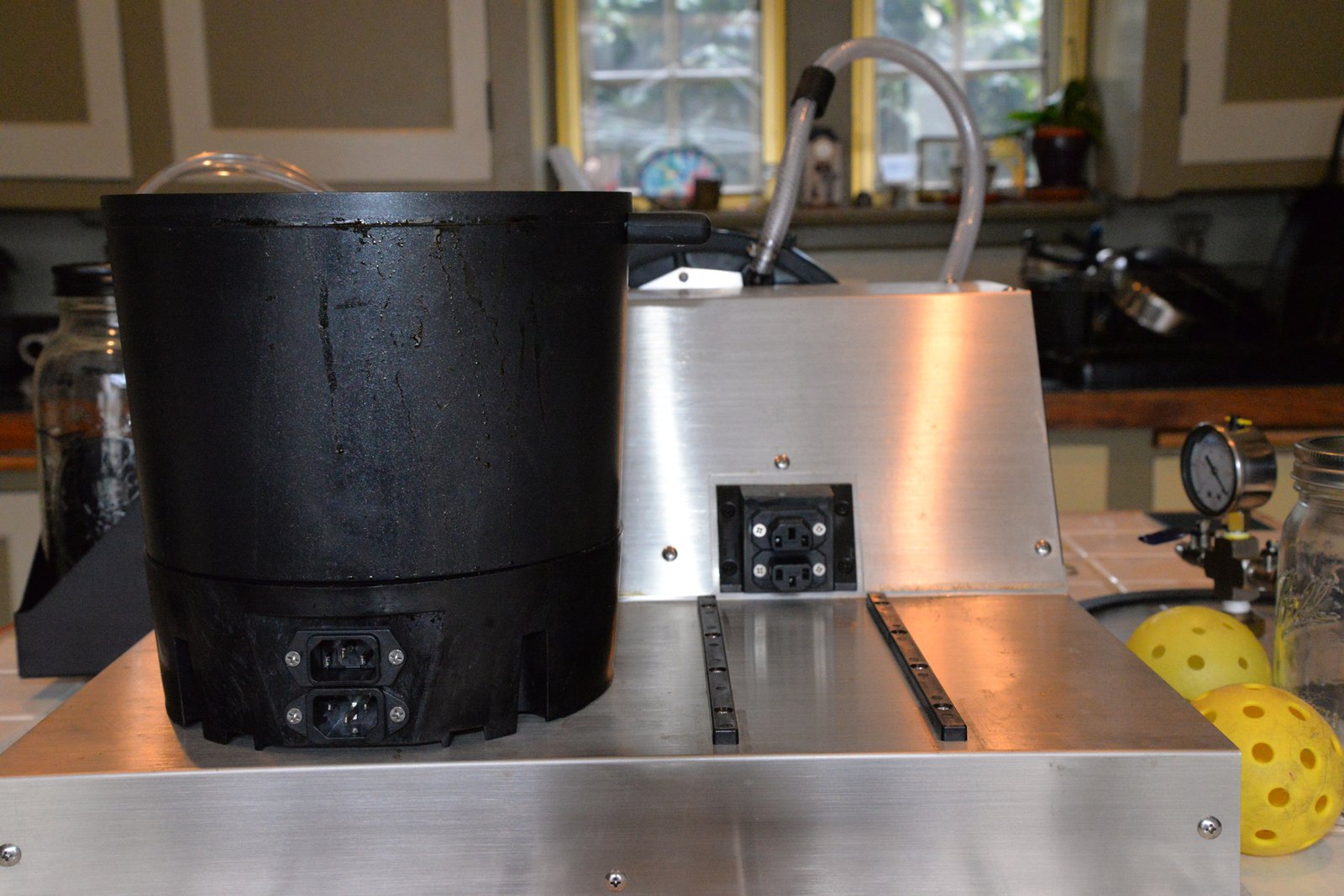 The EtOH Pro is a clean design supporting easy wipe clean up, with the bulk of the assembly stainless and the attached recovery pot powder coated.  The pot sits on rails which guide its male plug into the systems female receptors.

Setup consisted of turning the machine on and holding the startup button ten seconds so as to set my altitude as about 98’ above sea level.  The downloaded “destruction manual” details how to set it for higher altitudes in 1,000-foot increments, which involves then pushing the button once for each 1000 feet of altitude.

Operation was as simple as pouring my solution to be recovered into the pot, placing the lid on top, setting the dial, and pushing the button.  For my recovery trials I ran at about ¾ of the dial range, and when using the pot as a heated vacuum chamber for purging, I used full dial.

Besides the 15 product runs of about 1400 ml each, I also did three recovery runs of straight alcohol to measure recovery efficiency and timing.  I performed those tests by performing a couple false starts to clear the condenser and dumping the spit jar, before filling the recovery jar until the meniscus was at the exact top of the 1/6” wide 1500 ml mark on the jar, and then decanting that jar into the recovery pot.

After recovering the 1500 ml alcohol, which took about 73 minutes, I again performed a couple false starts to clear the condenser and dumped the spit jar before again measuring the level, and I found that the meniscus was now just at or slightly below the 1500 ml mark, suggesting losses were 1/16 to 3/32” in a half gallon jar, which is a negligible loss.

The EtOH doesn’t have an automatic shutoff so elapsed time is somewhat subjective, which is why I ran it three times for an estimate.

On the plus side, because it operates at low temperature due to the vacuum, catching the exact moment isn’t critical as the product isn’t in eminent danger of burning.  When running product, I marked the expected recovery level on the jar so I could keep track of progress at a glance, while sitting at my desk.

Besides the EtOH pro, I used an existing rotary vane AC vacuum pump and a 2L vacuum flask with Buchner funnel.  Alas, I was unable to find my calibrated lab thermometers so used both infra-red handheld and an electronic emersion thermocouple to approximate temperatures.  There was a 11F degree disparity between the two, so temperature is approximate.

I used the QWET process utilizing inexpensive easy to obtain ½ gallon canning jars and used my -18C/0F freezer to chill both the jarred material and the 190 proof Everclear/Clear Springs prior to extraction.

The dab-ables I finished in two steps.  I poured them out of the collection pot while there was still enough alcohol left to not leave a heavy film, decanting into a Pyrex casserole dish or a 10” pie dish.  I then let most of the remaining ethanol evaporate away over the next couple of days, before scraping it up and smearing it on raw parchment paper that I had folded into a round basket that fit inside the collection pot.

I placed the parchment paper in the flat bottomed EtOH recovery vessel, using the EtOH Pro controls to maintain the heat around ~125F, and an auxiliary lid supplied by Extract Craft that allowed me to use one of my vacuum pumps to pull a 10,000 micron/-29.5” Hg vacuum during purge.

I used my own instrumentation during purge testing but did note that while my test gauge showed -30” (29.92”), the smaller liquid filled gauge supplied showed only about -29” Hg.

My 6 CFM pump is capable of around 100 microns/0.003937” Hg Absolute, so I question its accuracy, but alas, though my own test gauge has a calibration feature, I have no certified standard to calibrate it against either.

That does highlight the point that if you wish more accuracy and resolution, you can replace the analog gauge with a digital micron gauge, giving you 760,000 graduations instead of the 60 on the current one. 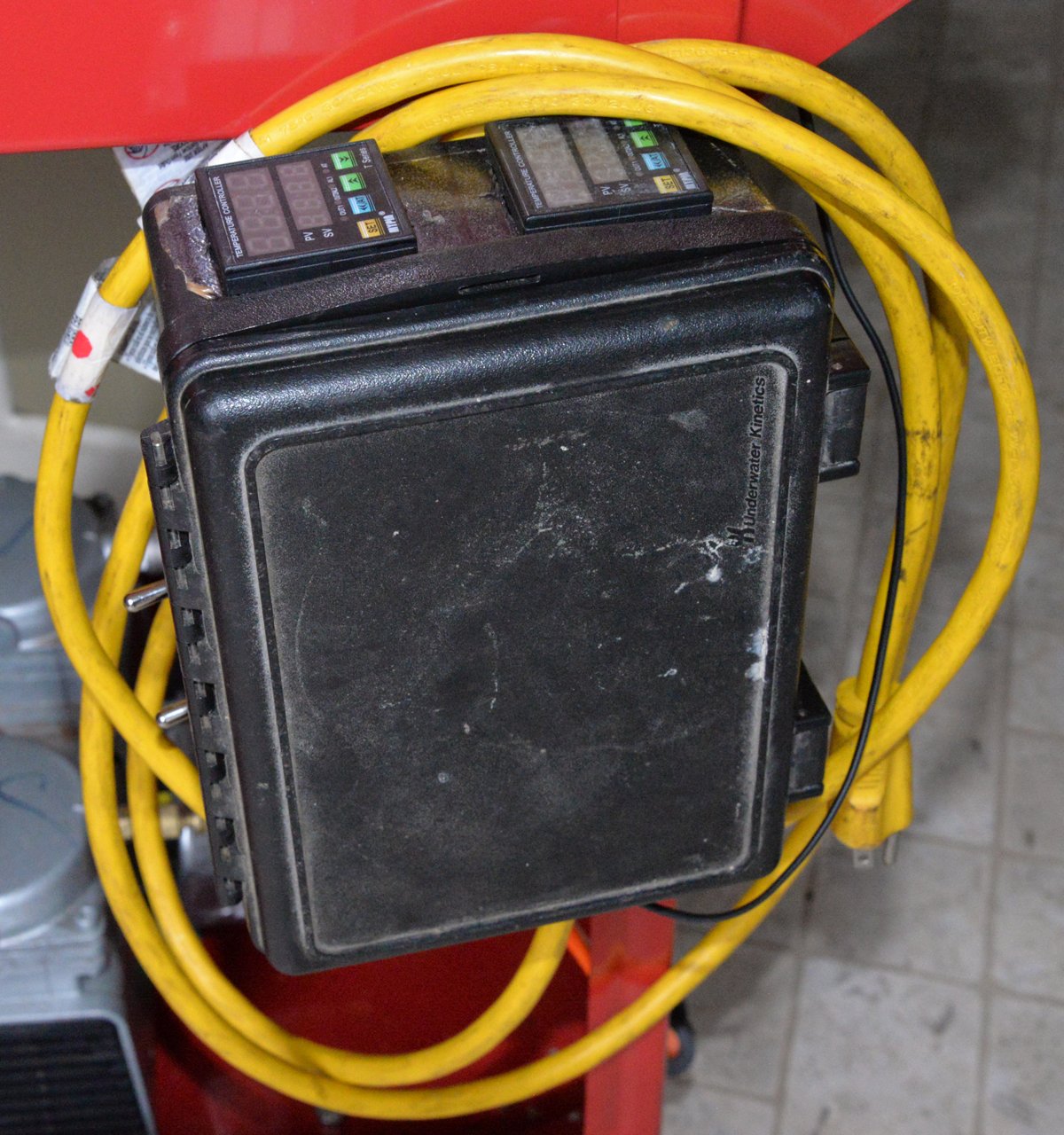 Here is the auxiliary lid, as modified by Moi to enable me to install other instrumentation for testing purposes.  The mods in the picture below are the ¼” brass bulkhead, with the rest of the Christmas tree assembly as delivered from Extract Craft.

The EtOH auxiliary purging lid, as modified by Moi

I turned the balance of my concentrate into a sublingual by first removing the alcohol from my QWET extract and then replacing some of it with enough MCT oil to flow smoothly through an eyedropper, directly in the recovery pot.

After mixing and decanting the MCT oil/concentrate mixture into dropper bottles using an eyedropper, I added a dropper full of Lorann cinnamon candy flavoring oil to make it tastier as a sublingual.

Cleanup in both cases was easy and involved wiping the wetted surfaces with a paper towel wetted with clean ethanol.

My original question in testing this unit was, “Is there an advantage to this over a simple countertop still like the Megahome still or a simple DIY pot still?”

Not close to an apples and apples comparison.  The big advantage I see that a vacuum still has over a conventional still like the Megahome or DIY pot stills, is that it boils off the alcohol at a much lower temperature, so as to reduce decarboxylation.

It is also at a low enough temperature under reduced atmosphere so as to reduce oxidation and not burn the concentrate if you inadvertently let it boil dry.

Due to its orders of magnitude larger heat exchanger, the EtOH also has a higher recovery rate than a Megahome style stills.

Lastly, the EtOH recovery pot doubles as a temperature-controlled vacuum chamber for further purging on parchment or PTFE film, a feature not possible with the Megahome or DIY stills.

To the last question of “Is this a unit that would serve my needs when serving as my own resource for meds?”

Clearly it is, as it just did with minimal auxiliary equipment, most of which in inexpensive and was lying around anyway.

Besides the EtOH Pro and auxiliary lid, I used the following common household items:

6.0          A single edged razorblade in holder to transfer concentrate from the plates to the parchment.

Hee, hee, hee, snicker,snark, snort, I just had to try it!  I picked up a couple 750 ml bottles of Pinot Noir and a long case, which I turned into 200 mL of brandy and 100 mL of white lightening.

I first distilled off 500 mL of liquid from the two bottles of wine, which you can see from the pictures below were cloudy, but when I distilled off the first 200 mL from that, I got a bell clear brandy that burned with a clear almost invisible flame and which was both tasty and potent. 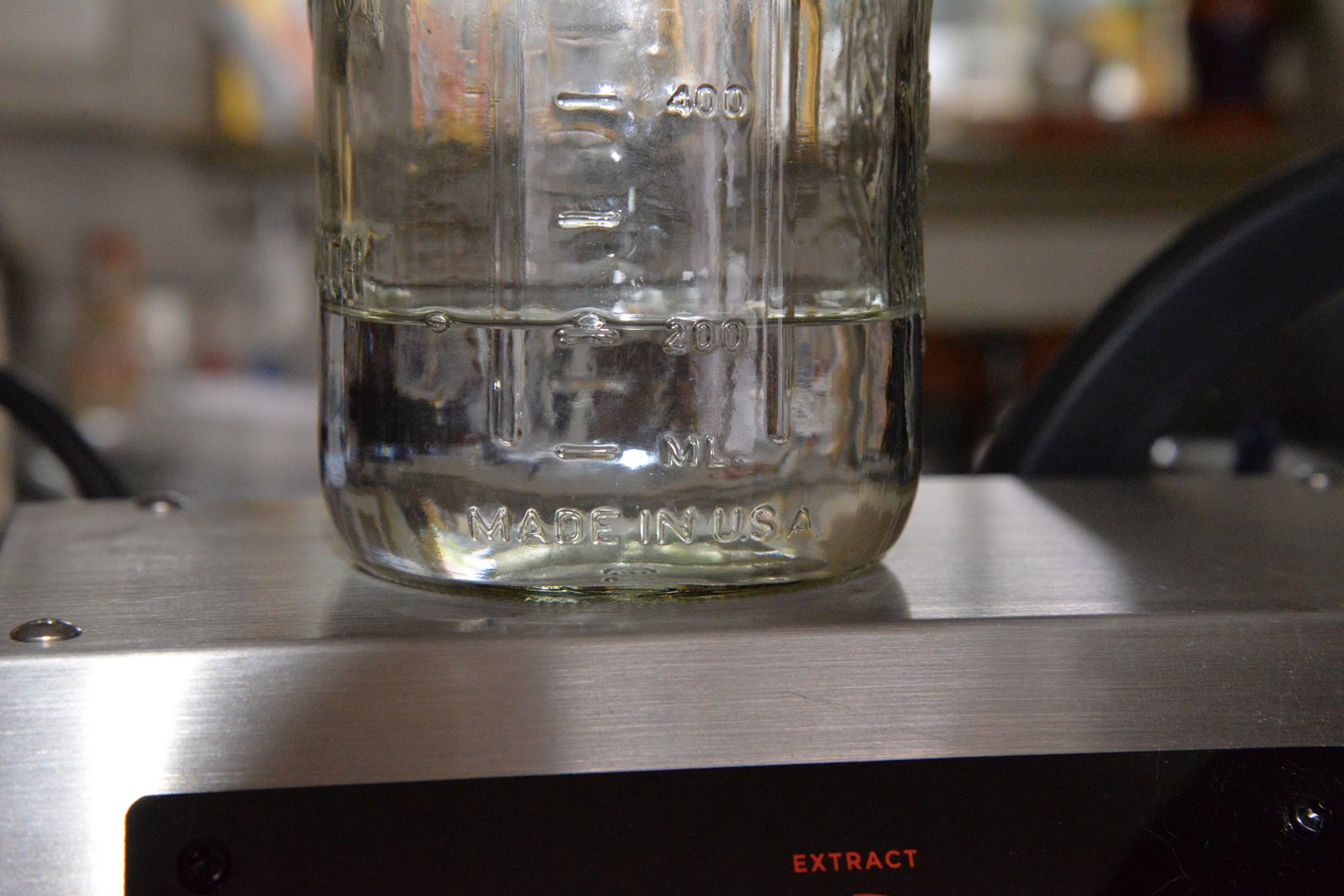 Brandy From First and Second Distills of Pinot Noir

Distilling the beer to yield white lightening worked, but was a low yield for all the effort at 5%, so I gave up after distilling off about 100 mL of high octane ethanol.  The flavor at this concentration is malty and reminiscent of a brandy.

Another possible use for this vacuum still is to concentrate lower proof vodka into higher proof for use in extraction.  To explore that possibility I’ve ordered a new hydrometer and a pound of Drierite desiccant to see how high I can get the proof with multiple runs and a dessicant.  More on that later…..