Sometimes good thangs come in twos and this was one of those occasions, cause shortly after publishing my results from testing Extract Crafts EtOH Pro, MedXtract in Canada, offered us their competing Essential vacuum recovery system under the same offer, to run like I stole it and just send back the shards when I’m through.

Hard to pass up such a good offer, even though I had already extracted all of my cannabis backlog this year, so I extracted Rosemary instead, and tried out the heated vacuum purge chamber feature using some concentrate that I recovered from my biannual dab pipe cleaning and haven’t figured out what to do with yet.

My EtOH Pro article created a stir in some circles where LPG concentrate is the preferred product, so let’s separate that debate as a different issue.

Those of ya’ll whose primary interest is dabbing concentrates will get the most bang for your buck with concentrates extracted using nonpolar, lower boiling point LPG extraction below -50C techniques, so as to preserve the maximum monoterpenes.  Extracting “Live Resin” will ostensibly maximize the aromatics and flavor.

Neither the EtOH Pro nor the MedXtract Essential are suitable for LPG extraction, though they can both be used to refine LPG extracts using processes like winterization.

Ethanol extraction however encompasses effective dab-able concentrates, and is the method used to produce a large number of carts, where the terpenes are added back post extraction, in addition to numerous other applications, including medical, so it is a viable process in the cannabis industry and ethanol processing equipment should be looked at from that more global perspective.

One plus factor here locally, is that ethanol extraction is still legal, where it is now a Class B felony to extract using LPG outside a licensed and permitted facility.  That is a plus to us brothers and sisters avoiding jail and property seizure.

My testing was oriented toward answering function and utility at the margin questions.

Does the unit perform as claimed by the manufacturer?

How many functions might it serve in the average home?

Is there an advantage to this over a simple countertop still like the Megahome still or a simple DIY pot still?”

Is this a unit that would support my needs when I’m serving as my own resource for meds?

The MedXtract Essential is made in Canada and slow Customs can sometimes be an issue with imports, but my test unit arrived in good condition within a few days without issue.

Some assembly required but the two Allen wrenches needed are supplied.  Everything went smoothly except inserting the four tubes inside the collection jars.  That went well after I shortened them slightly and chamfered the tube end with sandpaper, as per the installation manual and furnished my own pocketknife and sand paper.

Here is the unit fully assembled, including the Buchner funnel lid feature: 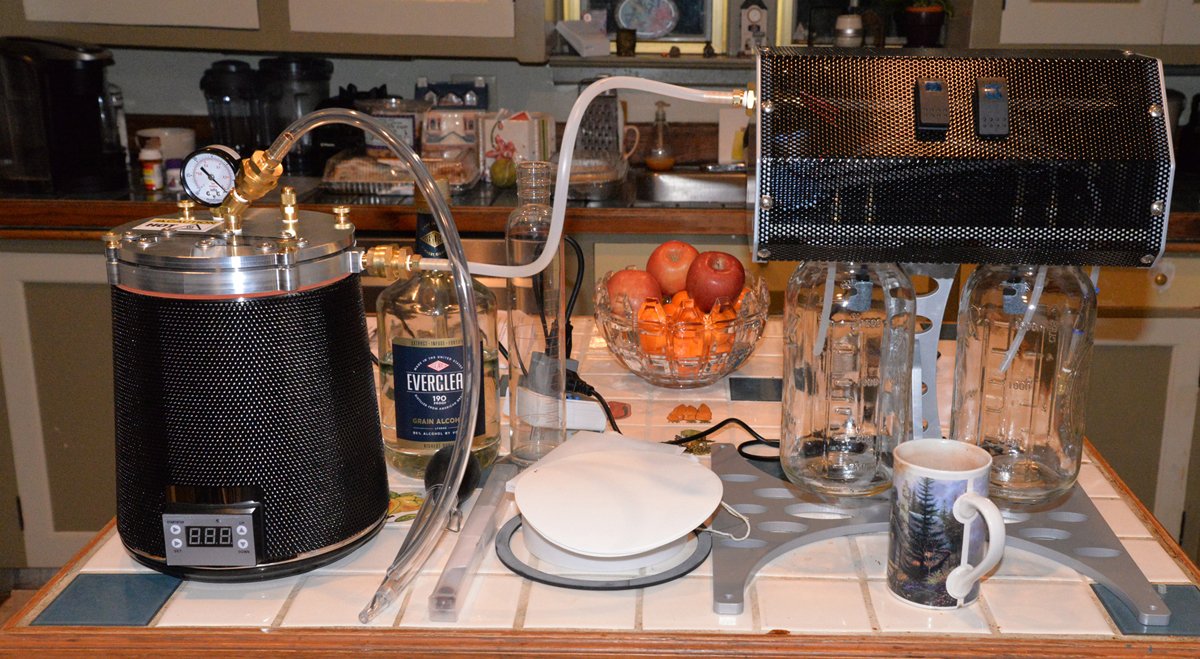 Fully assembled and itching to strut

1.0  The first I ran was recovery efficiency. I decanted 1500 mL of 190 proof into a recovery jar, marked the meniscus level with a sharpy at exactly at the top of the graduated mark, and then poured that into the boiler.

I set the digital temperature controller on the boiler to 70C and set the dead band to +/- 1C.  After it stabilized, it ran from 68C to 72C. 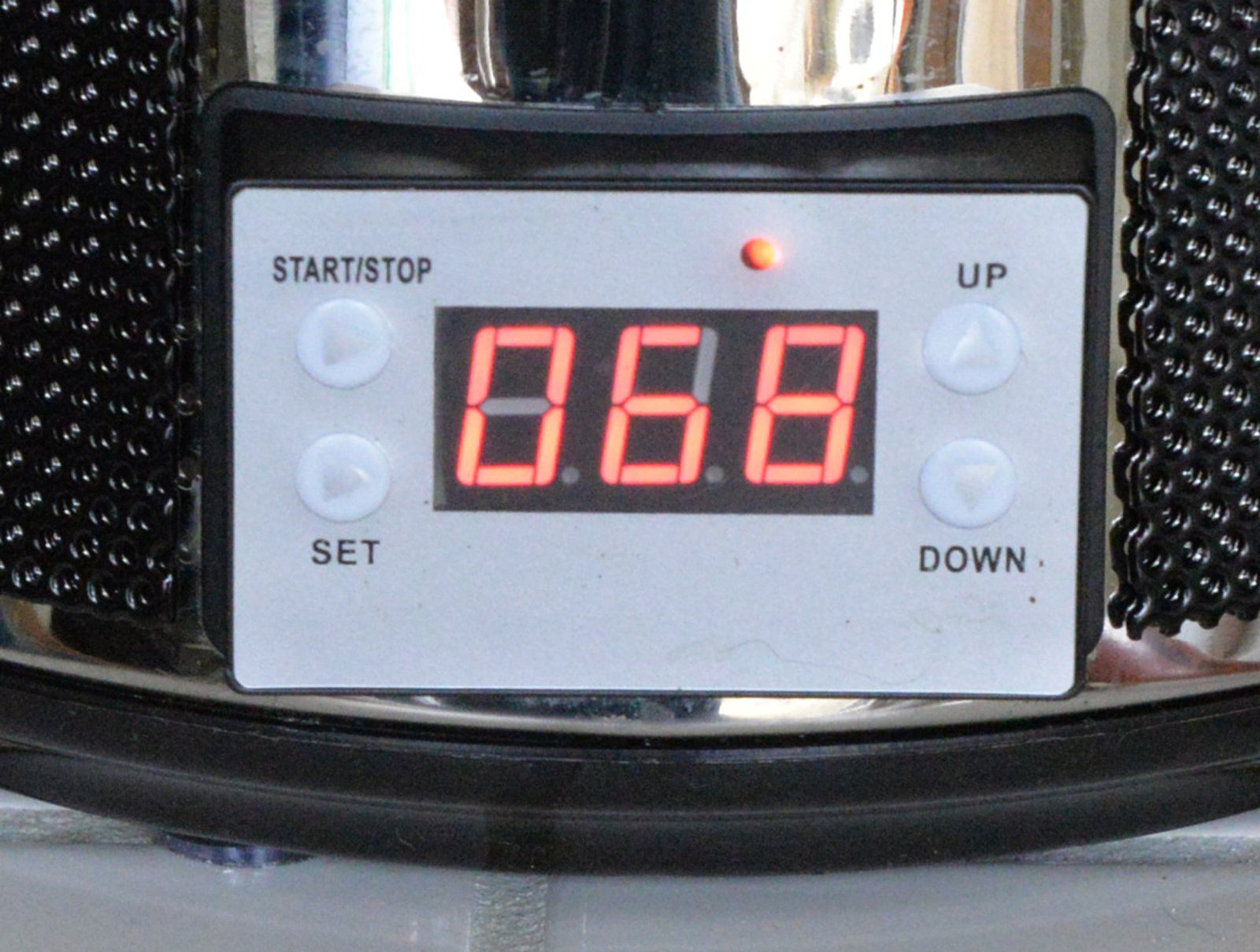 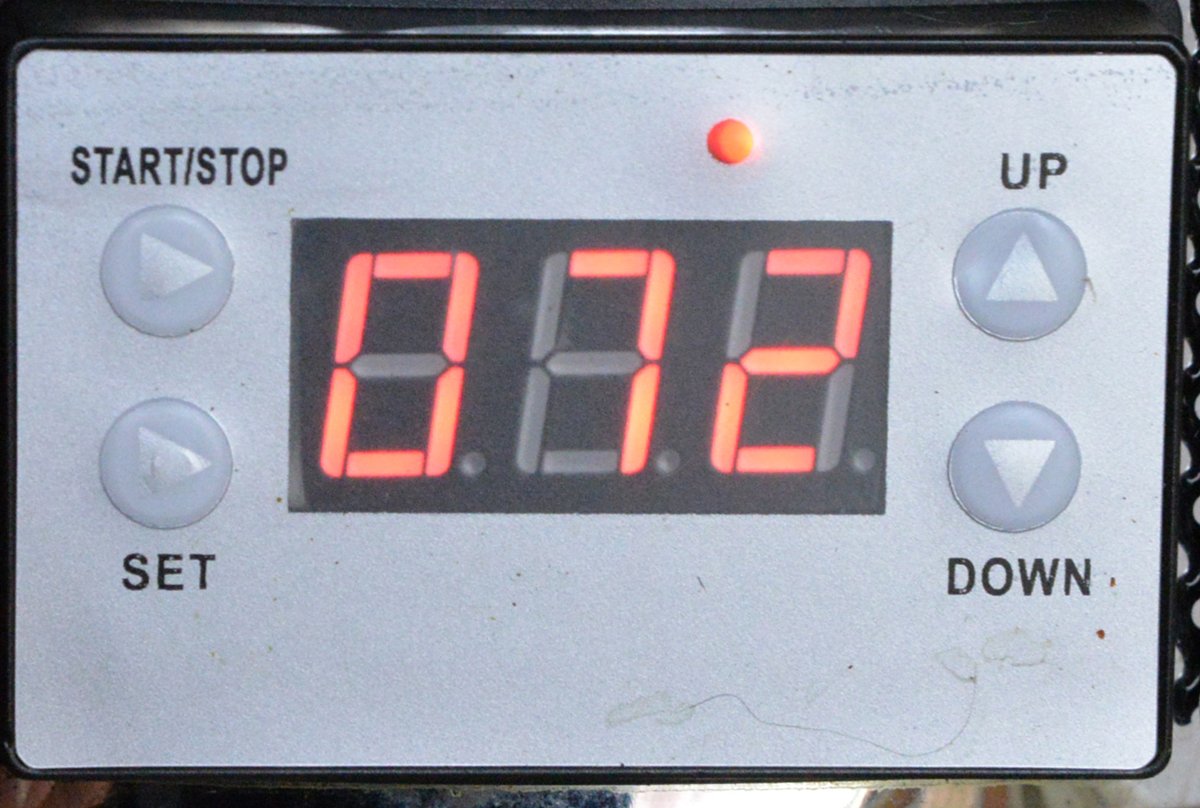 High when set at 70C

After pushing the start button to turn it on, I started the vacuum pump and condenser fans.

I then pressed on the boiler lid until the gauge started to move and backed off and observed the level of alcohol in the boiler through the window and shut down the process when the last drop evaporated.

I then backfilled the boiler using the brass ¼” flare fitting cap in the lid, which also served to blow down the condensers and empty their contents into the collection jar.

To insure that the condenser was fully purged, I restarted the pump and used a towel to press the hot lid tight enough to initiate a vacuum seal and let it build to around 5” before shutting off the pump and fan again and back filling..

Recovery efficiency was high as demonstrated by the following before and after pictures.  Recovering 1500 mL at 70C took 38 minutes.

Starting level with meniscus at top of 1500 mL line

An experiment not run with either machine, but which ostensibly would work, is producing your own alcohol from mash.  Last time I did a cost analysis, it costs about $8/L to produce.

3.0  As I was already set up for alcohol concentration, I concentrated two bottles of bargain Pinot Grigio into about 200 mL of tasty Brandy.

Here is a handy boiling point calculator that I found at: https://www.omnicalculator.com/chemistry/boiling-point  ,

4.0  As I wasn’t impressed with my previous experiment turning a long case of 5% beer into White Lightening, I decided to skip that one this time and move right on to the Rosemary extraction experiment.

5.0  Alas, I extracted all my cannabis material conducting the EtOH Pro test, so I ran this test extracting Rosemary, which grows profusely in our front garden.

Unlike Cannabis, Rosemary’s goodness lies within her plant cells as opposed to being in surface trichomes, so I blended a half gallon of Rosemary leaves stripped from the stems in 190 proof Ethanol and strained the slurry through a 10 mesh pasta strainer to remove the bulk of the solids.

I had previously assembled the Buchner funnel by installing the four ¼ /20 studs that attach it to the lid itself, so I assembled the filter stack resting one of the #4 lab filters provided on the perforated plate and covered it with the woven stainless cloth screen.

The Buchner lid assembly then sits on top of the boiling pot and the solution to be filtered is drawn through the filter assembly using system vacuum and a siphon hose.

Buchner Funnel Lid assembly with siphon tube drawing in solution to be filtered.

I then recovered the alcohol from the system and filtered it again through a coffee filter to product the following Rosemary essential oil extract.

6.0  The last test I ran was using the boiling tank as a heated vacuum purge chamber, using the silicone rubber pot liner and raw parchment paper to produce a shatter.

Alas the only suitable material that I had to use was some heavy dark red tincture from cleaning my dab pipe, which I ran as is without first removing the bulk of the alcohol.  I made a parchment liner for the silicone rubber pot liner and poured the roily tincture directly into the parchment.

To achieve a deeper vacuum, I hooked one of my own vacuum pumps to the auxillary pump port for this process and was able to achieve -30” Hg on the pot gauge. 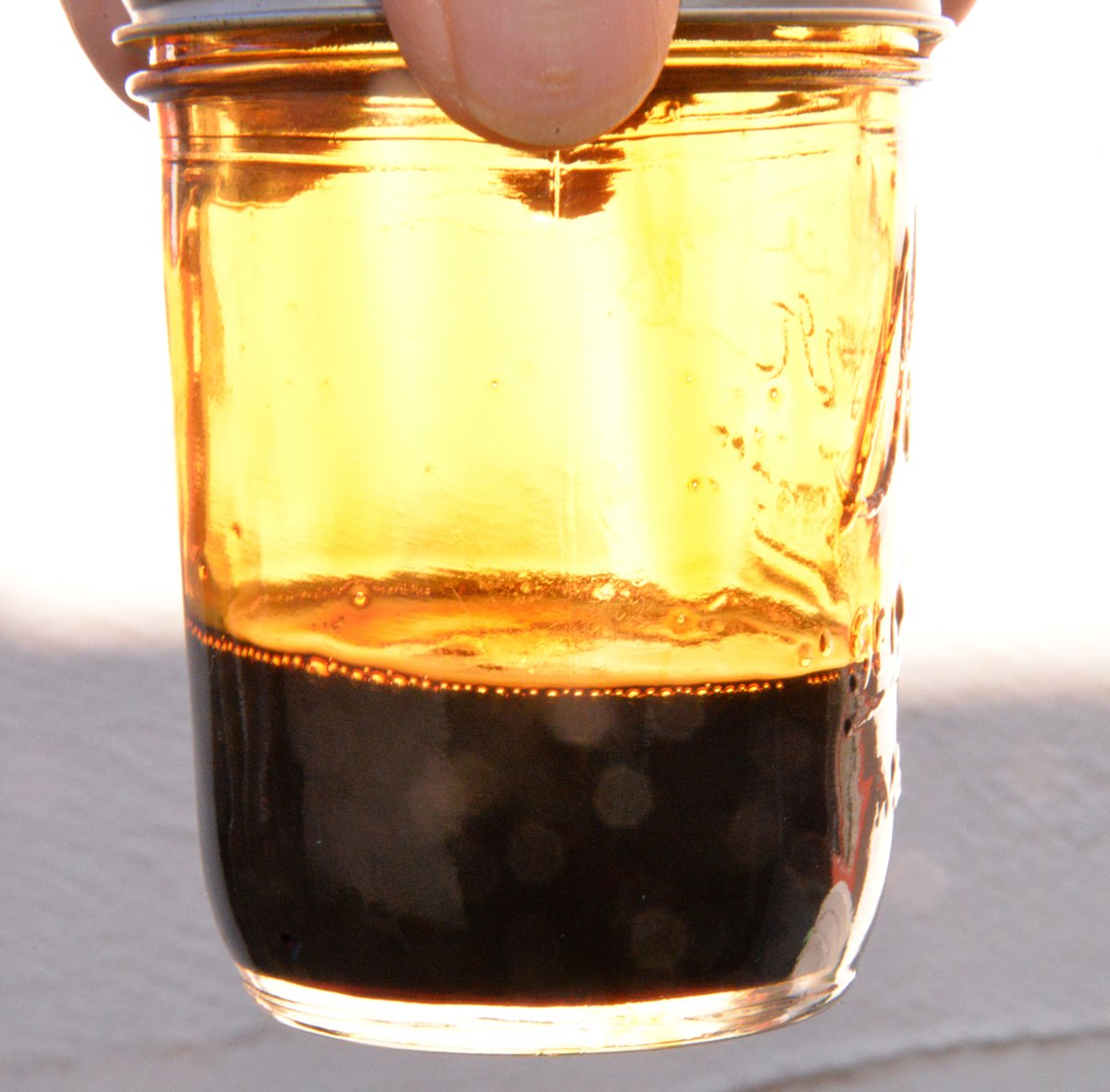 In retrospect, it was a mistake starting with that much alcohol present and the resulting bumping made a mess of the inside of the boiling pot, but it worked to adequately purge the balance of the alcohol and left behind fully a purged concentrate.

Because it was already decarboxylated and much of it was CBN, I had to place it in the freezer for 30 minutes to solidify it up enough to flake off the parchment into jars.  After warming back up it produced a stiff pull and snap material solid enough to stand the dab tube upright in or suspend the dab jar as pictured. 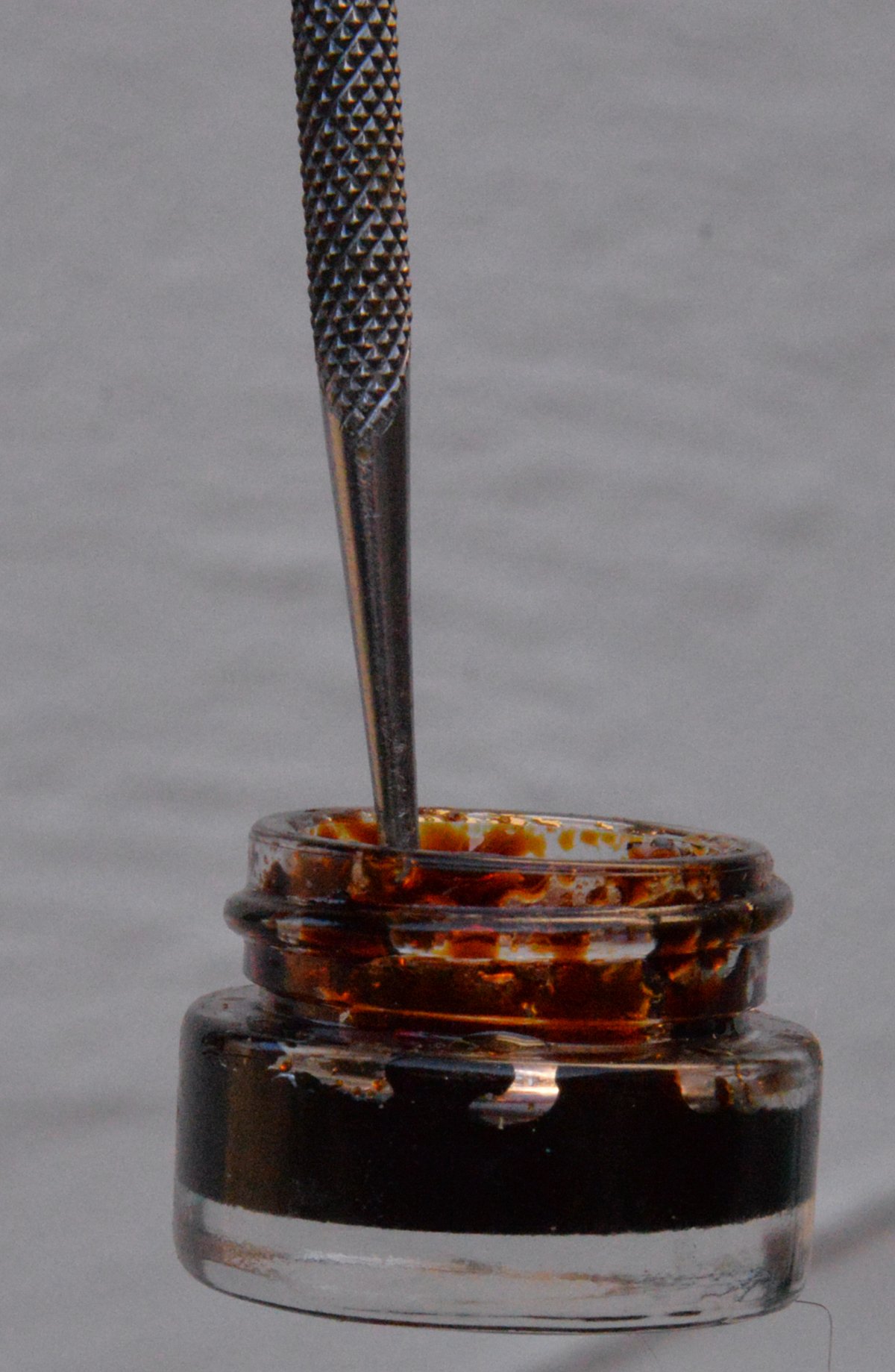 Equipment cleanup for return was easy and involved recovering some more alcohol and wiping down all the easily cleaned stainless surfaces, which I did three times to make sure because of crossing both state and international borders.

The MedXtract Essential kit comes with a timer and an adapter allowing both the boiler and the condensing console to plug into it.

The intent is to provide a shutoff in leu of the operator’s close observation, so as to prevent the boiler running dry and overheating the essential oil.

Unfortunately I didn’t know the times of any of my experiments, so didn’t test that feature.

Hee, hee, hee, testing these two vacuum stills has stirred my interest into other applications in the culinary arts and I’ve charmed a retired Le Cordon Bleu graduate to work with me developing applications as soon as his Covid shots and waiting period are over.