It is a less expensive and more readily available method, but though also a FDA Class III solvent, Isopropanol is not rated as GRAS like Ethanol, so purging guidelines must be strictly adhered to.

FDA residual solvent standards for a Class III solvent is as follows:

Solvents in Class 3 (Table 3) may be regarded as less toxic and of lower risk to human health. Class 3 includes no solvent known as a human health hazard at levels normally accepted in pharmaceuticals. However, there are no long-term toxicity or carcinogenicity studies for many of the solvents in Class 3. Available data indicate that they are less toxic in acute or short-term studies and negative in genotoxicity studies. It is considered that amounts of these residual solvents of 50 mg per day or less (corresponding to 5,000 ppm or 0.5 percent under Option 1) would be acceptable without justification. Higher amounts may also be acceptable provided they are realistic in relation to manufacturing capability and good manufacturing practice (GMP).

Easy to tell if you are below 5000 ppm, as Isopropyl is a pungent alcohol, so human sensory threshold is as low as 11 ppm, with irritation beginning around 512 ppm.

Here is a link to Science Labs MSDS for Isopropyl:  http://www.sciencelab.com/msds.php?msdsId=9924412

It gives the following exposure limits:

Please also scan down to Section 5, under Fire and Explosion Data, and note:

Vapor may travel considerable distance to source of ignition and flash back. CAUTION: MAY BURN WITH NEAR INVISIBLE

Secondary alcohols are readily auto-oxidized in contact with oxygen or air, forming ketones and hydrogen peroxide. It can become potentially explosive. It reacts with oxygen to form dangerously unstable peroxides which can concentrate and explode during distillation or evaporation. The presence of 2-butanone increases the reaction rate for peroxide formation.

Explosive in the form of vapor when exposed to heat or flame. May form explosive mixtures with air. Isopropyl alcohol + phosgene forms isopropyl chloroformate and hydrogen chloride. In the presence of iron salts, thermal decomposition can

occur, which in some cases can become explosive.

It forms explosive mixtures with trinitormethane and hydrogen peroxide. It produces a violent explosive reaction when heated with aluminum isopropoxide + crotonaldehyde. Mixtures of isopropyl alcohol + nitroform are explosive.

In view of how inexpensive fresh Isopropanol is and how readily it forms peroxides, we typically don't recover it for reuse.

With a dielectric index of 17.9, versus Ethanol's 24.5, Isopropyl is less polar, yet is still much more aggressive in extracting both targeted and un-targeted elements. Where we start a 3 minute soak with Ethanol, starting point with Isopropyl is 20 seconds.

Like Ethanol, we address it using subzero extraction temperatures, and address the aggressiveness issue by shortening soak time.  We typically yield 75 to 80% within 20 to 30 seconds, and pick up the balance using a second soak.

We keep those two extractions separate, as they have different appearances and the second will have more sedative medical properties.

QWISO can make both high quality vaporizing concentrates out of quality material, or be used as a low cost solution to harvesting bulk quantities of lower grade material for topicals or fractional distillation into Clear.

The first preparation step is to reduce water content.  The material doesn't have to be desiccated, but we like to pull off the fan leaves and hang our plants 5 to 7 days before freezing.  At that point they are still highly aromatic, but the small stems will snap when bent.

For high grade material, we then broke the buds up into about 3/8" to 1/2" pieces by hand or using a Nug Buster for larger quantities, before packing 3/4 full in jars, and placing those in a -18C/0F freezer overnight.

For mixed leaf, just pack them in the jar to about ¾ full, guts feathers an all.  The less they are broken up, the fewer ruptured cells exposed and the less dust.

Here is a jar of mixed trim and a couple bottles of 99% Iso ready to go in the -18C/0F freezer overnight. 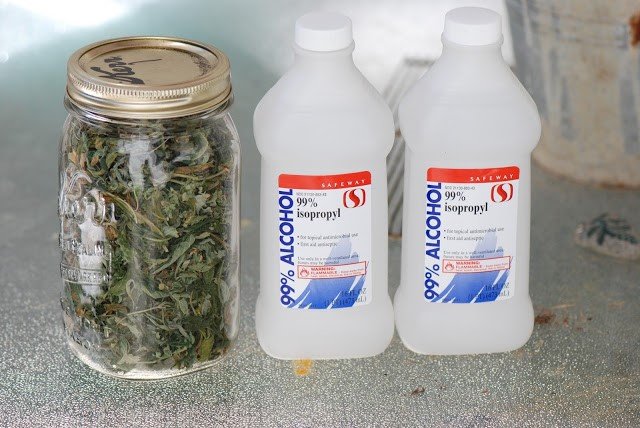 When frozen and the alcohol is at -18C/0F or colder, fill the jar to within an inch of the top with Isopropyl, put the lid on and shake gently.  Wrap the jar to minimize heat pickup and soak for 20 seconds. 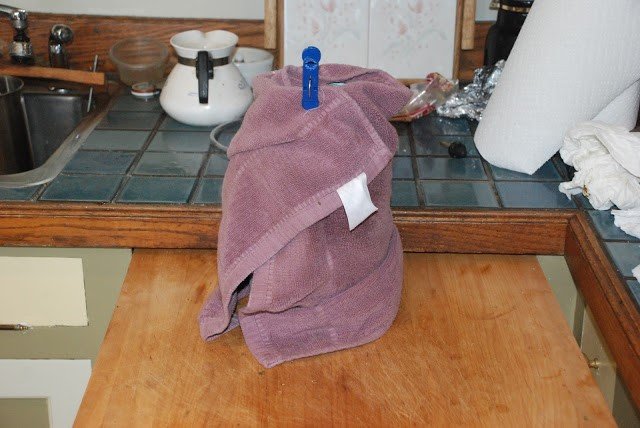 Shake gently one more time in the 20 seconds, and then dump the jar through a coarse strainer to rapidly separate the alcohol from the plant material.

Here I use a chinoise strainer for that purpose, followed by filtering it through a commercial coffee filter.

Don't squeeze the plant material, but return it wet to the freezer to chill for the second extraction.

Once the material is at -18C/0F again, a second QWISO extraction can be made exactly like the first except for time, which may be less than 2 seconds, so visual observation works best.

Sometimes perfection is illusive and in our pursuit of maximum yield we end up with a green solution, which if it isn't toooo green, can be turned to yellow or amber by sticking a clear container of the solution in bright UV light or sunlight, which breaks down the chlorophyll into Pheophytin and allows the amber colors from carotene and anthocyanins to show through.

It helps with the color, but not the harshness, as the Phenophytin byproduct of decomposition and some carotene are still there.

The next step is to remove the Isopropyl and there are several ways to do that, but the simplest for ma and pa is to just blow it away outdoors using a Pyrex pie dish and a fan.  As previously noted, it can be distilled and recovered, but with its reactivity and low price, we don't.

Here I did three extractions instead of two, just to see what happened, and they are lined up in front of a blower.

Note they get progressively greener from soak one through three.

Blowing down three pie plates at once

Here is a scraping of the extracted oleoresin from the above first soak. 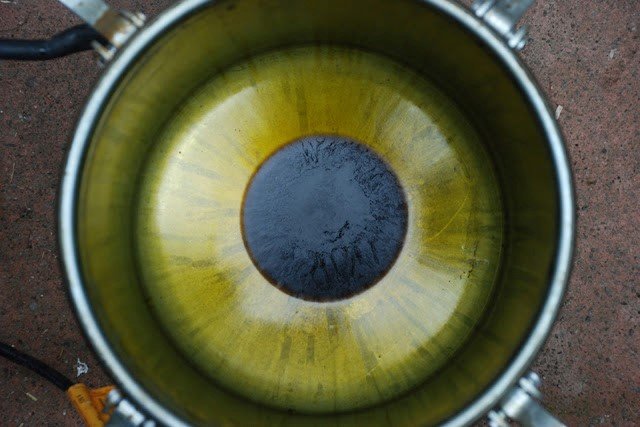 While that may look enticing, it still smells and tastes of Isopropyl, so more purging required.

The quickest way to get the raw extract to below sensory limits, is to stick it in a 52C/125F vacuum oven, and when it melts, pull it down to 10,000 microns/-29.5" Hg and boil away the balance of the alcohol.

If you don't have a vacuum oven or chamber, you can still evaporate away the balance by placing the dish on a 57C/135F heat mat, with a towel covering it to keep dust out, and let it sit until the odor and taste are gone.

For applications that require that the material be decarboxylated, we place a beaker of the material in a 21C/250F hot oil bath and keep track of the progress by watching the bubbles.  We both cook off the balance of the alcohol, but decarboxylate as well in a single step.

For getting started, the cheapest way I found, was to use a Cuisinart fondue pot of canola oil at 250F for even heating. Rival also makes one that works, but has less sensitive controls at the lower temperatures.  Beware of things like Fry Daddies, which have little to no control of temperatures at the lower ranges, while doing a bang up job at the upper end.

Note the lids under the beaker to keep it off the bottom,

Alcohol bubbles are larger and highly variable in size, and once they stop popping, you will note the continuation of small equally sized fizzy bubbles, which is the CO2 being given off by decarboxylation.

Here is the finished product.