Most of us'ns first experience with cannabis was smoking it, but once its medical properties began to be better documented and medical cannabis came of age, it became obvious that iron lungs would be necessary at the dosage rates required, and it became known that burning cannabis produces some of the same free radicals and carcinogenic byproducts of pyrolysis as tobacco.

Excluding injections, the available portals into the human body are oral, respiratory, trans-dermal, and rectal.  Heavier dosages are more suited to oral and rectal, with trans-dermal more direct and to the point in some cases.

The respiratory system is however the fastest and can provide the required dose for some applications such as PTSD in seconds.  It is also harder to over dose than with oral and rectal.

I use it in concert with oral and topical for my arthritis, as an effective way to fill in the effects sag between oral doses.  It also adds tones and effects not present from an oral dose, so acts as an enhancement.

One of those being that it also helps with the PTSD that I and my siblings caught from my "flack happy" father returning from WW-II, already traumatized by growing up poor in the Great Depression.

Volcano jumped on the bandwagon early with a system for vaporizing plant material and depositing the smoke in bags to be passed around:

Looking for an alternative to incinerating or vaporizing sweet Mary's foliage for her charms, some of us started looking for ways to vaporize Mary's essential oils below combustion temperatures instead.

Hot Block, based on Hot Knife

My first design and build was the Shamanizer, which vaporized either bud or concentrates in a test tube heated in an oven I whomped up out of two emergency lighting lamps using quart halide bulbs.

The test tube has a two hole stopper with an air intake tube that extends to the bottom of the tube and an exit tube with a tube to draw the vapors through.

The temperature was controlled using a lighting rheostat and it actually worked very well on what ever you put in it.

Front view of Shamanizer with Sharpie mark for correct setting.

I basically took the glass faces off the two lamps and bolted them face to face, manufacturing links to hold them together on the right, and through drilling one of the threaded screw lugs, so as to put a screw through into the others threaded lug.

Below is the two hole stopper with the intake tube taken from a PaperMate ball point refill, and the exhaust attached to a tube for drawing.

While the Shamanizer was effective and versatile, taste through a plastic tube wasn't a strong feature.

Next Agnostic Taoist came up with a well and wand setup that worked well, though the borosilicate wands were prone to cracking so next evolution was to go to a quartz wand, and then to a Titanium one.

The well is filled with concentrate, the heated wand immersed in it and withdrawn, as you simultaneously draw through it.  The partial vacuum vaporizes the concentrate on the hot wand, and the vapors are drawn through small holes around the inside rim of the double walled well.

From that idea came several other related ones.  The first was the steamroller with a well, followed by a pipe that we used in class that had quick change bowls, allowing rapid sampling of multiple concentrates.

Each bowl has an o-ring and just drops in the steam roller pipe body.

Meanwhile, in a land far away, Hashmasta Kut came up with the Titanium Swing Skillet, which had a pad of Grade 2 CP Titanium secured in a rotating wire frame, which allowed him to heat it with a torch, and then rotate it under a glass bell.  Concentrate is then dabbed on the skillet and sucked up through the bell attached to a water pipe.  See Titanium Skillet for more information on that system.

He and his sister manufactured highly artistic pipes that the Ti skillet was mounted to, which soon became collectors items.

Around that time, a student gifted me a Mori pipe, which was a handy little portable that was stolen from me and I could never find anywhere to buy another one:

Next we start to see Titanium and Quartz nails, with and without globes.

Vapor pens also started being readily available and came in a variety of designs and shapes.

Vapor pen selection, some with carts and some with skillets.

Vapor pens are of course the ultimate in portability, though some leak when carried in any position besides vertical.  While they fill their niche, the real breakthrough as far as I'm concerned is using injection nozzle heaters to make an electric nail.

A number of designs out there, but here is the one we designed and built:

There is a panoply of choices for electric nails out there, but in general they insure you of a correct and repeatable temperature and aren't as attention getting as firing a blow torch up in the room.  I like our design because it lifts off the Ti nail, so that it can be passed without stringing the cord along. 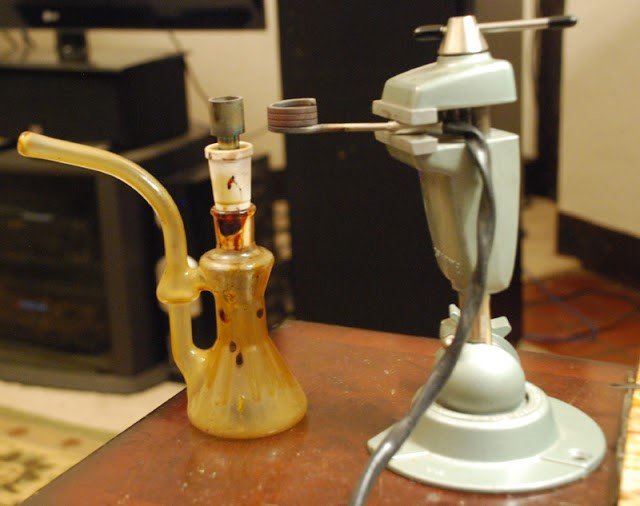